Australia’s Minister for Health GREG HUNT MP eventually found time to apologise to the Mayor of Katherine NT for his foul-mouthed tirade, boorish and intimidatory behaviour.

Katherine is in the “Top End” of Australia and about 320km south-east of Darwin.

Hunt has been minister for 16 months and this is his No 1 performance to date.

This is the same minister who cannot apologise, let alone answer correspondence, to the thousands of Australians who contracted contaminated blood and have died waiting for an apology, as directed by The Senate, as well as assistance.  As for the criminal neglect of our blood supply, Hunt is another minister who condoned the Australian Red Cross Blood Supply criminal cover-up.

Many other issues MEAG has brought to the minister’s attention in the last year he ignores.  Hunt is just another minister who doesn’t read anything, just issues abuse.  In other words, he has nothing to say.

ACT Health at it again!  ‘Doctoring’ anything interfering with ACT Health’s agenda.

Calvary Hospital, The Canberra Hospital…  What is it that the ACT Government, i.e. Australian Capital Territory, doesn’t want the public to know?  Lots we surmise.  And lots we know.

These are hospitals which have their misdeeds covered-up by their own territory government.

THE full scale of the Bacchus Marsh Hospital baby death scandal is being kept secret.

CANBERRA, ACT — Senator Katy Gallagher’s dishonesty has finally caught up with her.

Her maiden speech to The Senate detailed her overseas citizenship connection but she was blind to being in breach of the federal parliament’s rule meaning she was ineligible to sit in the Senate.  But she refused to budge and continued to illegally occupy a Senate seat.

Now the High Court of Australia has determined she is ineligible so she’s out.

What a waste of taxpayer’s money Gallagher has caused by her stalling, obfuscation and denials but that’s nothing new.  It is what she did as ACT Chief Minister and ACT Health Minister leaving doctors and nurses fearful to speak up about hospital failures in her Territory.  As for patients of the ACT who complained of maltreatment?  They were dismissed, ignored and treated with contempt.

As ACT Chief Minister she could overrule herself as ACT Health Minister – go figure that conflict out – and keep scandals under wraps.

CANBERRA, ACT – Katy Gallagher’s citizenship breach of the Australian parliament is a continuation of covering up her secrets, but let’s go back a bit.

For the past 8 years rumblings about ACT Health, The Canberra Hospital, John James Hospital, Calvary Hospitals, just keep bubbling to the surface.

Katy Gallagher was ACT Health Minister from April 2006 to December 2014.

What Katy did next?

She quit the ACT parliament mid-term and slithered into the Australian Senate leaving her ACT secrets secret.

Scandals she managed to keep a lid on have re-surfaced. Another inquiry into ACT Health has been announced. But what happened to the 2017 inquiry? And the 2012 inquiry?

Back in February 2010 nine obstetricians had quit in the previous 13 months amid bullying claims at The Canberra Hospital. A hostile work environment led to the exodus.

Then in April 2012 The Canberra Hospital data tampering scandal erupted and Gallagher stepped away from the inquiry citing conflict of interest with the senior executive, alleged to have doctored emergency department data to make the ED’s performance look better, who had a personal connection to Chief Minister Gallagher’s family.

During her health ministerial days, health and other scandals kept on surfacing.

As Chief Minister, Katy had the temerity and power to shut down any inquiry into her Health ministry.  Citing conflict of interest with TCH was one way out, but wasn’t the real conflict being both ACT Chief Minister and ACT Health Minister?

Or was the ACT Health ministerial portfolio one which required a cover-up gatekeeper?

What Katy did next?  You tell us.

This comes after less than 2 years ago when 9 of 11 specialist doctors from the hospital’s Emergency Department resigned.  The shortage of beds “bed block” meant patients could not be transferred out of the ED for patients to be admitted.

Doctors and nurses described conditions as ‘unsafe’ and ‘dangerous’.

Disaster as LGH loses its accreditation

Who will guard the guards themselves?

AHPRA has not got a clue what investigation means.  Evidence and facts?  They don’t worry about that.  They manufacture it and stick to it.  Woe betide challenging it.

Just take a look at the AHPRA state and territory branches and who they are run by.  Yes, the old heads of state medical boards.  They just slithered into positions with the new national medical board for further self-aggrandizement and same old misinformation and obfuscation aka cover-ups continue.  A medical mafia.

The old saying:  Fish rots from the head down.  AHPRA CEO is ex-FED Department of Health and ex-NHS.  This is why AHPRA is as it is.   Would not have a clue what safety and quality is for there is no safety and there is no quality when it comes to AHPRA.

Hundreds of emails daily fill our inbox of AHPRA’s malfeasance from people across the nation who don’t know each other but they’re all saying the same thing.  AHPRA is inept beyond belief.

What is AHPRA for if it cannot investigate and regulate?  Why aren’t bad apples weeded out?  From AHPRA’s ranks as well.

Nothing short of a royal commission is needed to look into AHPRA’s misconduct. You think the banks are bad?  AHPRA is worse, truly.

SYDNEY — Since 9/11 governments including those of the USA, the UK, France and Australia have introduced tough, intimidating legislation to discourage the legitimate activities of a probing press, so greatly needed after the Iraq War proved that executive government could not be trusted.

Often hiding behind arguments about defending national security and fighting the war on terror, governments criminalised legitimate journalistic work, ramping up their attacks on journalists’ sources, and the whistle-blowers who are so essential in keeping governments honest.

SHOOTING THE MESSENGER by Andrew Fowler out now.  BUY THE BOOK published by Routledge www.routledge.com 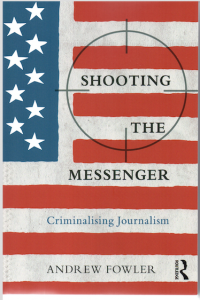 Respect what our servicemen and servicewomen did for our country.          Honour their duty, courage, service, dignity and memory, always.