View the TGA’s website for Adverse Events.  The don’t “advertise” these adverse events because they are an illustration of their failures.  Here’s the link on COVID-19 adverse events, another thing the TGA doesn’t really want you to know about:

“WATCH AND SEE WHAT HAPPENS”  ...that’s the TGA — still on work experience!

The Therapeutic Goods Administration (TGA) is the nation’s medicines regulator and part of the Australian Department of Health. It has a record of ineptitude.  If the TGA cannot do what it needs to do, we need to ask WHY?

Consumers will be left in the dark about unscrupulous advertising of medicines and medical devices if Australia’s drug regulator implements a new complaints-handling system, public health experts have warned.

An expert review has recommended the Complaints Resolution Panel and the Therapeutic Goods Advertising Code Council be disbanded, and a single agency be formed to manage complaints.  The review found this would lead to faster and more effective sanctions for regulatory violations.  But medical professionals harbour serious concerns.

“They lean over backwards to accommodate the profession or the industry and it really isn’t helping consumers.”

READ MORE of Melissa Davey’s report in The Guardian, 5 June 2018:

WHY HAVE A TGA?  THE MEDIA IS DOING ITS WORK!

The only notification by the TGA to recipients of Johnson & Johnson ‘DePuy ADR hip replacements’ happened the day after ABC Four Corners “Joint Reaction” broadcast of 16 May 2011, eight months after DePuy’s voluntary recall.

Makes it clear the effect of the incompetence by the Therapeutic Goods Administration (TGA) and the National Joint Replacement Registry (NJRR) not to remove the Johnson & Johnson DePuy ADR hip device from the market sooner.

Submission of 27 July 2011 (a most worthy read) to the Australian Senate inquiry The Approval of Medical Devices in Australia:  “The TGA needs to take a more aggressive role in suspending suspicious devices from the Australian Register of Therapeutic Goods when any patient’s health concerns are compromised.”

“The submission from J&J Medical shows they would like to rely heavily on “risk management” and “post market surveillance.  What this actually means is that manufacturers would like to be allowed to continue supplying clinically untested devices into the market and let the patient take the risks, and then watch and see what happens.  This is the current approach in Australia and agreed upon by the TGA.”

“If surgeons were required to make patients aware that the prosthesis they were about to implant was untested and that they could not say that it had been shown to be safe, the patients would be horrified.”

“Australians’ expectations of the TGA are that they would only allow a safe and well-performing implantable device onto the market.  They believe that is what they are there for.  They are wrong.  “The TGA is fully aware that many devices are trials!  The expectations of Australians that a failing medical device would be taken off the market quickly to prevent any more damage, as is done in the motor industry, is wrong.  Australians expect that all surgeons would be more discriminatory and evidence-based into their choice of prosthesis.  They are wrong.“

Registered Nurse Stuart CAIN had blind faith in the nation’s medicines regulator to protect his patients.  He reassured them that the DePuy hip replacements approved by the TGA were perfectly safe – until he had one implanted to repair the damage wrought by years of rugby in his youth.

“There were massive problems with these joints yet the TGA, through their process of not having to clinically trial something to approve it, was allowing them to still be used in Australia,” he says of the agency’s tardiness in banning the heavy metal-leaching false hips.

“It doesn’t matter if it is a drug or a piece of equipment; we should be able to use any product in Australia knowing it is thoroughly tested and is safe.  The TGA is there to protect patients, but they failed dismally.”

The federal government commissioned a rash of reviews into the TGA after recent health scandals involving the dangerous DePuy metal hip replacements – recalled only after they were implanted in 5500 Australian patients – and Fluvax, the CSL flu vaccine banned for young children after triggering febrile fits in some.

The TGA would not listen; its medical bureaucrat director arrogant and ignorant.  He quit right on Christmas Eve 2011 when the PIP scandal erupted.  All got toooooo hot.  For his crimes against incompetence he trotted off the NSW Health department to position of deputy director-general strategy.  Anyone receiving correspondence from this individual, give it the respect it deserves, and throw it in the bin.

“A SENATE COMMITTEE HAS FOUND THE DRUG WATCHDOG WANTING”, The Australian, 1 June 2012:

It took the nation’s medical device watchdog 21 months to directly contact surgeons and ask them to tell their patients about problems with Poly Implant Prothèse (PIP) breast implants after they were recalled in April 2010, a Senate inquiry has found. 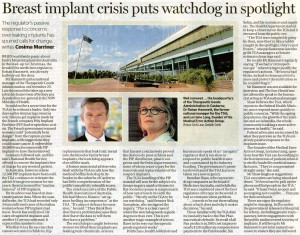