“Medical Error Action Group is the depository of an extraordinary number of medical treatment blunders and the scale of it is astonishing.“

LORRAINE LONG, founder of Medical Error Action Group, is Australia’s first and foremost patient safety advocate — someone of outstanding courage, tenacity, perception and fight. Lorraine has the background that proves it after 28 years of first hand experience of medical error, patient deaths and injuries, coronial systems, hospital systems, government cover-ups, failures of justice, and the plight of people affected by medical error, she has used her “medical error education” and voice for public good.  She is well-organised and energetic with a resourceful and spirited team.

Such is Lorraine’s insight into the importance of linking coronial data nationally and internationally that she was invited to make the Opening Address to the “National Forum on Coronial Information”.      Besides Australia she has been consulted by coronial jurisdictions in Japan, New Zealand and Northern Ireland and invited to participate in coronial system expert panels and working groups.

Lorraine has given talks in public hospitals to executive, medical staff, and junior doctors on what to do when things go wrong; participated in various safety and quality health department working groups; presented papers at medico-legal conferences on the rights of patients and how they fare at the other end of their bungled medical treatment; and most notably worked with state police homicide squads and sex crimes squads.

The “Butcher of Baulkham Hills and Bega” scandal was years of monitoring and gathering before Lorraine took the exposé to investigative journalist Ross Coulthart to air who, together with producer Nick Farrow, went on to televise three cover stories which won them three “Walkleys” for excellence in journalism and a story that made a difference.  As for criminal “butcher” Graeme Stephen Reeves, he was eventually imprisoned.

Lorraine, a rich repository of knowledge of medical error and formidable proponent of patient safety, is also the author and co-author of a large number of reports on medical error, patient safety, death certificate discrepancies, hospital system failings and simple improvements such as how sharing mistakes saves lives.

The U.S. Department of Veterans Affairs, the U.S. National Patient Safety Foundation and various American hospitals sought such reports including: “Medical Adverse Events and Families”; “Medical Adverse Event Deaths – The Data”; and “A Rescue Package for Patients, Doctors, Hospitals and Governments to Avoid Litigation”, the latter discussed with ABC’s Tony Jones on Lateline. 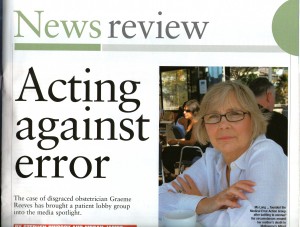 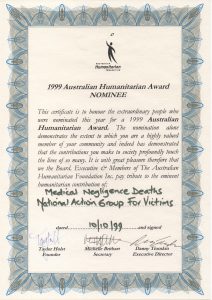