A doctor accused of more than 100 sex offences against 81 people, most of whom were patients, over a 27-year period, will go on trial that is expected to last six months.

Immunologist Dr Jeremy Michael Stafford COLEMAN, has been ordered to stand trial in May 2017 of 130 charges of indecent and sexual assaults at his Newcastle practice.

SYDNEY:  Notorious former gynaecologist Graeme Reeves “made a mistake” when he misdiagnosed a seriously ill new mother but does not deserve criminal punishment, his barrister says.

Dubbed the “Butcher of Bega” after being convicted of sexual assault, indecent assault, mutilation of a woman’s genitals and pleading guilty to fraud, the deregistered doctor is now on trial charged with manslaughter over the death of a female patient more than 20 years ago.

In his opening address in the NSW District Court on Friday, prosecutor David Price said a “reasonably competent” obstetrician could have diagnosed Mrs McAllister as having a bacterial virus.

“His failure to take steps to appropriately investigate Kerry’s condition and his failure to assume and treat for bacterial infection was a gross deviation from the standard of care of a reasonably confident obstetrician,” Mr Price said.

“It seems evident that Kerry had a bacterial infection from the outset … If Dr Reeves had acted in a different manner it is highly likely that Kerry would have received appropriate treatment much earlier.”

The court heard that Reeves maintained that Mrs McAllister had a viral infection and had repeatedly brushed off the concerns nurses had about her increasing temperature and pain.

It was only after Reeves saw the results of the blood tests ordered by another doctor that he organised for Mrs McAllister to be transferred to Westmead Hospital where she died the next day.

The court heard that Mrs McAllister had complained of a painful throat and congested lungs and hip and legs.

There is expected to be evidence that when Mrs McAllister arrived at Westmead Hospital she was left in limbo and transferred to a ward not appropriate for a critically ill patient.

Reeves was found guilty by a District Court jury in 2011 for maliciously inflicting grievous bodily harm with intent after he surgically removed the clitoris and labia of a patient without her consent during an operation to take out a pre-cancerous lesion.  He was also found guilty by judge alone trial of sexually assaulting another patient.

The trial continues in the District Court, Sydney.

Couldn’t hack a sacking or the parliamentary back bench.  Too humiliating for her?  Tut tut, she’s displayed what we knew she was made of…. cardboard. Dishonest before entering the health portfolio and dishonest exiting it.

What about all those patients who were injured and killed in HER health system? They copped “Jillian justice”…cover-up, discrimination, platitudes.  She favoured clinicians and left patients for dead.

No backbone, no depth of character.  Now she’s off with her bat and ball to cause a by-election in her North Shore electorate instead of working for her constituents to the next state election in 2019. What a sore loser!

As for claiming she mentored the new NSW Premier, God help us, New South Wales could be in for even bigger cover-ups. 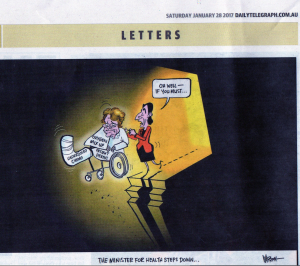 There was no way for Federal Health Minister The Hon Sussan Ley MP would recover from rorting taxpayer funds for her travel expenses.

While spending time, with the compliments of our taxes, supporting political party donors she forgot that constituents come first, not party donors.

The letter MEAG wrote on 23 December 2016 is what is called “the death-knell letter to health ministers”.  It works every time.

When will Australia get a health minister who addresses the important and pressing issues affecting, in this instance 20,000, patients?

While politicians have time and diligence to fiddle their expense accounts, the public wait in vain for correspondence to be answered, i.e. to do their job.  This is why the public are fed up with politicians, well and truly.

Attend to our correspondence, Minister Ley.  It’s your morals versus ours.  What’s it going to be, Minister?

What is it with our health politicians?  They’re all a bunch of duds.

We have NSW’s Jillian SKINNER MP riding by helicopter here and there but suffering ongoing memory loss when asked to explain why she was rorting the taxpayers’ piggy bank —  politicians think is their pocket money but it is theft  — now the Federal health minister Sussan LEY is at it, amongst many of their ilk. “It’s in the rules” is their cry when caught.  But don’t they declare to conduct themselves honestly when taking the ministerial oath?  That is, the Ministerial Code of (mis)Conduct.

LEY claimed to be meeting “stakeholders” on Queensland’s Gold Coast.   Which real estate agents were they?

She can’t abide by the rules of the Senate and apologise to tainted blood victims of Australia’s worst medical treatment disaster but she can find time to hire a chauffeur to be driven to to the Gold Coast and engage in property dealings using our taxes to get there and taking her boyfriend along with her.  Oh, “we the taxpayers” paid for him too.

Australia, be angry.  This is not good enough.  The calibre of our representatives stinks.

Women with breast implants are at a greater risk of a rare cancer form than once thought, Australian health authorities have warned.

The Therapeutic Goods Administration (TGA) reported an increased risk of Anaplastic Large Cell Lymphoma (ALCL) associated with breast implants.  Previously the risk was estimated between one in three million to one in 50,000.

The TGA now puts the risk between one in 10,000 and one in 1,000 and has confirmed 46 cases of breast implant-associated cancer rates in Australia, including 3 that were fatal.

Updated about 5 hours ago

The personal data of 550,000 blood donors that includes information about “at-risk sexual behaviour” has been leaked from the Red Cross Blood Service in what has been described as Australia’s largest security breach.

The organisation said it was told on Wednesday that a file containing donor information was placed on an “insecure computer environment” and “accessed by an unauthorised person”.

The file contained the information of blood donors from between 2010 and 2016.

The data came from an online application form and included “personal details” and identifying information including names, gender, addresses and dates of birth, a Red Cross statement said.

Red Cross Blood Service chief executive Shelly Park said “due to human error” the unsecured data had been posted on a website by a contractor who maintains and develops the Red Cross website.

At least blood recipients will be able to track their donor’s blood!

These are the words by Australia’s former Prime Minister, The Hon Tony Abbott MP.  He said them on ABC News on Monday 16 September 2013 following his landslide election win.

They apparently do not apply to The Hon Jillian Skinner MP, Minister for Health, who again has transgressed into misleading the Parliament of New South Wales.

For one Sydney family the news that a stillborn baby had been mistakenly cremated left them with a visceral sense of deja vu. They had lived through it three years earlier.

Fairfax Media can reveal that a 20-week stillborn baby boy was cremated in error at the same hospital – Royal North Shore – in late 2012.