Former UK Prime Minister John Major is among the politicians who could face questions over their role in transfusions that led to thousands of deaths in the UK.

As for Australia’s contaminated blood scandal, where 3 times more Aussies ended up with contaminated blood that their British counterparts, our politicians will be facing similar questions before long for they too went to great lengths to keep a lid on Australia’s scandal.  But truth always surfaces, eventually.

Read more of The Sunday Times UK from Caroline Wheeler:

ACT Health still in denial its operations are not secret and can handle everything their way.  Who’s kidding who?  Can’t pull the “privacy” excuse anymore which in reality is used for smothering their misfeasance.

For a tiny territory that demanded its own government, it still cannot get its health system in order in its short existence.  Non-stop scandals, cover-ups, crises, bullying, patient, doctor, nurse suicides…

Pressure is mounting on the ACT Government to include public hearings and increased protections for witnesses in its recently announced review into ACT Health.

Read more of Daniella White’s article in The Canberra Times:

Dr Keith WOOLLARD did not have enough experience to perform a complex angioplasty, a tribunal has been told.

The former Australian Medical Association (AMA) president has been found guilty of professional misconduct for making false claims about his training experience so he could be accredited to perform angioplasties.

In 2005, Dr Keith WOOLLARD told the medical advisory committee at Perth’s Mount Hospital he should be accredited because he had reached the training requirements of at least 200 supervised angioplasties, all logged.

Two months after being granted accreditation, he was asked to provide documentation, but the logbook Dr WOOLLARD sent only listed 154 angioplasties.

Dr WOOLLARD claimed he had assisted with angioplasties on more than 100 patients in the 1980s, supervised by Dr Geoffrey Cope, and therefore his experience “greatly exceeded” the requirements.

But at a hearing of the WA State Administrative Tribunal this year, Dr Cope said he had never performed any angioplasties with Dr Woollard’s assistance.

“If Dr Woollard scrubbed up and attended any cases performed by me, he certainly did not participate in them,” Dr Cope, who retired 10 years ago, said.

He claimed Dr WOOLLARD asked about training with him, but was rejected as being “far too fast, far too aggressive and potentially dangerous”.

Between receiving accreditation and filing his logbook, Dr WOOLLARD performed an angioplasty on journalist John Brown.

During the procedure, Mr Brown’s left main coronary artery was occluded.  Dr WOOLLARD said he assumed it was due to a dissection of the artery by either the guide wire or the guide catheter.

Despite the intervention of another cardiologist and later a cardiac surgeon, Mr Brown died from complications.

The WA tribunal said Dr WOOLLARD did not have the experience to operate on Mr Brown, had failed to explain the risks associated with the angioplasty to Mr Brown, and had not told him of the option of referral for coronary artery bypass grafting instead.

In his defence, Dr WOOLLARD said the lesion in Mr Brown’s left anterior descending artery was not complex.

However, three expert witnesses said the lesion was complex, being angulated, calcified, ulcerated and larger than 20mm in length, with an irregular contour.

“By reason of the complexity of the lesion, Dr Woollard should have referred Mr Brown to a cardiothoracic surgeon,” the tribunal said.

“At an absolute minimum, Dr Woollard should have given Mr Brown a realistic assessment of risks and benefits, and alternatives.”

In findings handed down this month, the tribunal said that Dr WOOLLARD knew he made false statements when he applied for accreditation.

“In proceeding with Mr Brown’s angioplasty, Dr Woollard demonstrated an unjustified self-confidence that went beyond a clinical error and constituted arrogance,” it added.

Sanctions will be decided at another hearing.

Heard this a thousand times before.  Lie lie lie – that’s what hospitals do, nurses, doctors, administrators, bureaucrats.  Tamper with records and giggle doing it.

It’s always “Oh, we’ve changed our routine from years ago”.  The HCCC believed the hospital’s lies and took no action.  Why? Why? Why?  Hasn’t the HCCC learnt?  What about the patient?

Don’t believe a word a hospital says when your loved one dies.

Read more of the ABC story:

This is why people who write to WA Health are ignored.  There is no benefit to them by actually helping you.  Your correspondence is binned while they party and line each other’s pockets.

Staggering corruption.  We heard it was going on.  Now it’s been “officially” uncovered.

Read more from the ABC:

If you knew what we know about breaches of medical record containment, you would OPT OUT without blinking.

Every transaction will be entered on My Health Record.  Don’t believe government that it will have fortress-like security.  Records are not secure now.

While this is an initiative for some peculiar reason, next step will be an ID CARD. This is Big Brother collecting more information on you.  Hasn’t government got enough already?  The nation’s health as a whole in one basket… scary!  And your DNA.  The government may start in years to come to profile you.

Insurance companies and Big Pharma will see this as a treasure-trove of information they will seek to access for purported research purposes. Governments are notorious for farming out such to the private sector.  Plus other sticky-beaks such as:

— Employers to deny you employment.

— Big Pharma to flog more drugs for you to take.

— Insurance companies to refuse to insure you.

Plus subpoenas served by:

— Insurance companies to deny your claims.

And remember our governments privatise anything they see as a cash-cow such as our utilities, roads, hospitals, airports, ports, electric light poles and wires, general post office, land titles office and the rest.

Just think what a goody-bag our health records would be.

Don’t forget the many medical errors made every day.  Those errors will be transferred to your MY HEALTH RECORD and may kill you.

Think about it.  Make your decision wisely.

CHIANG RAI, THAILAND — Infection control at its best.  Everything being done to isolate them.  An incredible rescue and heart-warming story for all.  Well done Thailand Public Health Ministry. 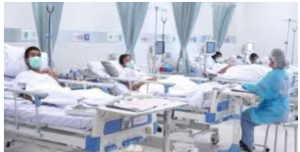 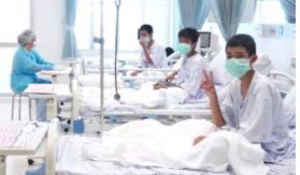 When will we see this in Australian hospital?  Where?  Hospitals do not isolate patients with deadly infections such as C.difficile, MRSA, VRE, MSSA…. you name it, they are mixed with other patients unaware the patient next to them recovering from surgery can be exposed to golden staph from the next patient.  The number of patients who are discharged and never know they have acquired these deadly infections until they end up back in hospital and wonder how.

At the Countess of Chester NHS Hospital, a 28-year-old nurse has been arrested on suspicion of murdering eight (8) babies and trying to kill six (6) others at the hospital’s neo-natal unit.

Detectives began investigating Countess of Chester Hospital more than a year ago, after the hospital reported a higher than expected mortality rate on the unit that cares for premature babies.

The probe initially focused on the deaths of eight (8) babies but police said they are now investigating seventeen (17) infant fatalities at the unit between 2015 and 2016.

A woman died of cancer after unnecessary and negligent surgery she received at the hands of a disgraced doctor in New South Wales, health officials have confirmed.

She was one of dozens of women harmed by Emil Shawky Gayed, who over the course of at least one decade mutilated and performed harmful surgery on patients.

Health authorities fear there may be many more women still to come forward.

The scandal also raises questions about how those who worked with Gayed did not notice his errors or question unnecessary surgeries and report him earlier.

The president of the Medical Error Action Group, Lorraine Long, told Guardian Australia that she had written to the then NSW health minister John Hatzistergos about Gayed in 2006 because her organisation had received so many serious complaints about him.

But DiRienzo said the hospital had reviewed its database and annual performance reviews for Gayed, and no issues had been recorded or raised until 2015.

READ MORE of Melissa Davey’s story in The Guardian:

MEAG COMMENT:  TELSTRA is Australia’s biggest telco.  Can’t even administer a telephone utility. Most complained about company in Australia.  God help every Australian patient with Telstra’s venture into the health arena.  Why the Australian government would give Telstra this contract is beyond belief. What does a telephone utility know about record keeping?  Not a lot.  Telstra has track record of gross breaches of privacy of customer telephone and internet accounts.

Poor Telstra.  Fresh from apologising for two outages in its phone network, including one affecting the triple-0 emergency line, Telstra’s failings are under the spotlight again.

A recent Senate estimates hearing asked health officials to explain exactly what was happening with the National Cancer Screening Register, for which Telstra was awarded a $200 million contract to establish.

The launch of the register was delayed by six months last year, finally rolling out on 1 December 2017.  And because the changes to cervical screening – which replaced Pap smears with five-yearly HPV screening – were linked to the register, this revamp was delayed too.

Under questioning, health officials revealed that Telstra’s pay had been docked over the bungle. Despite being at least 20% of the way into the contract, Telstra had only been paid $11 million, they said.

And fines (not just docked pay) were “certainly an option” if Telstra missed any more deadlines, they added.

Furthermore, although the new register went live in December 2017, patient histories will only be available on the register from the end of this month, which has left doctors with a hybrid model of state and national registries for the past six months.

It’s not all over just yet for Telstra when it comes to cancer registries.  It still has to set up a new bowel screening register.  This was also due in 2017, but was put on hold while Telstra worked on the cervical cancer register.  It is now expected to be up and running in late 2019.

Health officials said the delays to both registers had “no impact on patient services”, but pathologists don’t feel the same way.

As a result, analyses were delayed during the May-December period, leaving patients waiting for important results.

So, maybe it’s not poor Telstra after all, but poor patients.