Nearly half a million Australians are falling ill every year in the hospitals they turn to for help.

Adverse reactions to medicines, misadventures during surgery, haemorrhages, blood clots and faulty devices such as stents and joint replacements are adding to the misery of already sick patients.

An official tally of mishaps by the Australian Institute of Health and Welfare (AIHW) found in 2011-2012 almost 340,000 Australians suffered an adverse event in a public hospital.  A further 150,000 had a “health mishap” in a private hospital (those were some of the ones that couldn’t be covered up).

The largest number of medical blunders were abnormal reactions or complications arising from a hospital procedure, with 286,000 patients suffering such problems.

The second biggest group, 151,000, was associated with side effects from drugs.

Another 110,000 had a complication with a medical device inserted during their treatment and 35,000 developed an infection after a procedure.

As MEAG said “hospitals are dangerous places for sick people”.  It doesn’t matter whether it’s a public or private hospital.  The message is BEWARE.

FRANCE is about to launch one of its biggest trials as five managers from manufacturer PIP face charges of selling faulty breast implants, which sparked a global health scare.

More than 5,000 women have registered as plaintiffs in the case, in which the defendants, including PIP’s 73-year-old founder Jean-Claude Mas, are charged with aggravated fraud for using industrial-grade silicone in implants.

About 300,000 women in 65 countries, including Australia, are believed to have received the implants.

To set up a Medical Ombudsman for Queensland?  The Minister is ill-informed.  Queensland already has a Health Quality & Complaints Commission and it is useless.  What will a medical ombudsman do that the HQCC does not and will not do?  Pushing patients into a merry-go-round of bureaucratic departments with no one willing to hold medicos to account.

Queensland medical board must be sacked: Springborg | 18 April 2013

QUEENSLAND’S government wants to sack the entire state board of the Medical Board of Australia (MBA).

He said the public wasn’t properly protected from doctors who pose a risk of harm and he will set up a new medical ombudsman for the State.

Mr Springborg has written to 10 members of the Queensland board of the MBA, giving them 14 days to show why their positions are still tenable.

“It’s highly likely that their position is certainly untenable in my view,” he told ABC radio today. “That’s why I’ve taken this extraordinary course of action.”

Doctors were not to blame for the death of a Victorian baby who was transferred between 5 hospitals before dying from bacterial meningitis, a Sydney coroner has ruled.

He was initially admitted to Pambula Hospital on the NSW south coast, where the family was on holiday, on April 24, 2009, before being transferred to Bega District Hospital, Canberra, Sydney and finally Melbourne as his condition deteriorated.

In her findings, Ms Forbes said blame for Elijah’s death could not be apportioned to any of the medical staff that treated him.

“Elijah’s story does not reveal that any of his treating clinicians were uncaring or unskilled,” she said.

Outside the court, a patient advocate group described the findings as “disappointing”.

“I think Elijah’s mother and family would be very disappointed in the findings made today by the coroner,” Lorraine Long, founder of the Medical Error Action Group, told reporters.

“No clinicians unskilled?  I don’t think so.  The VMOs of both Pambula and Bega hospitals were unskilled.”

“Why should it take a case such as this to be on the front page of newspapers to make a change in the system?”

Ms Long said that while progress had been made in the health system since Elijah’s death, Bega and Pambula Hospitals remained “very much on the group’s radar”.

“We should have competent doctors in every country hospital,” she said. 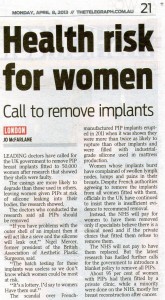 Female Brazilian doctor Virginia Soares DE SOUZA investigated over 300 hospital deaths and charged with murders of 7 patients, but authorities warn that number of victims may be far higher | 27 March 2013 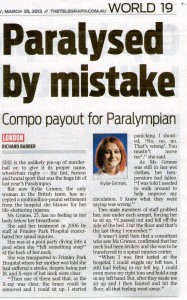