It believed hook line and sinker the spin coming from the NSW Ministry of Health.

It redacted submissions to render them senseless.  It demonstrated early on it was not going to look into anything unpalatable.  Clearly, it didn’t want to upset its political counterparts in the regions.

This is one piece of a collection that was generated from the Hunter New England Local Health District, namely John Hunter Hospital, Newcastle.  It’s immoral, indecent and unforgivable.  But the above-mentioned committee of inquiry wanted it to remain hidden: 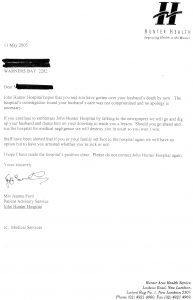