Exposing an hospital and government cover-up

How one woman’s needless death led to a nation-wide movement to prevent ‘death as a result of hospital care’.

Lorraine Long founded the Medical Error Action Group (MEAG) in August 1996 after a two-year struggle to uncover the circumstances of her mother’s death at Melbourne’s Alfred Hospital.  June Long was admitted after an asthma attack in June 1994 and 14 hours later she was dead; Not from asthma, but from medical malpractice.

Compounding the shock of June’s sudden, needless death were the cover-ups, puzzling hostility from hospital administrators, unconscionable conduct to thwart the Long family and Coroner, and evidence hospital lawyers tried to intimidate doctors from giving evidence at inquest.

After two years the State Coroner of Victoria, His Honour Graeme Johnstone, found that Melbourne’s Alfred Hospital contributed to June Long’s death.  Coroner Johnstone observed, ‘Unfortunately, there is no evidence that the lessons learnt by similar internal review processes are generally recorded and distributed throughout the hospital/medical system’ … and … ‘it is essential that all serious incidents involving iatrogenic injury/death be internally examined at hospital level’.  June’s death is formally recorded as iatrogenic.

Two years passed from June Long’s death before the Coroner’s finding.  “No-one should have to go through such extraordinary efforts to find out how their mother died”, recalls Lorraine Long.  “That’s why I felt compelled to form the group and educate others on being prepared for what they’re in for.”

Her first call was to a woman whose husband’s body had been lost after he died in a country hospital.

“We talked for hours and although the circumstances were different, what we’d been through was identical.”

Working from home, Lorraine began contacting other bereaved families who had been mistreated by the hospital system.  One by one, they told her similar stories.

“Every door had shut in their face.  They had to gather documents themselves.  Nothing was forthcoming.  No one would assist them and no one did assist them.  Everyone had to fight just to be heard, let alone to get coroners to investigate”, she says.

“Families did their own pushing. No one helped, not health departments, not health complaints commissions, not even Ministers for Health.  Hospitals were downright hostile.  It just became a pattern of obstruction nationwide.”

Getting the media on to it

By 1999 it had moved into a small office, staffed by a handful of volunteers and supported by co-ordinators in state capitals and regional centres.  It runs on donations and sales of information packs and has helped thousands of families who contacted its network, mostly relatives of people who died in hospital but a good many patients who survived.

The heart of the group is bereaved families, along with surviving patients and concerned medical professionals.  “Our support network is therapeutic for families.  They’ve got someone to talk to.  But forcing change onto the inert health system is equal priority.”

The MEAG’s major successes have been getting its exposés aired.  MEAG commentary is almost always heard when journalists take interest in hospital and medical crises.  With access to formal research and tip-offs from hospitals, forensic pathologists, clinicians and anonymous sources, the MEAG has become a go-to media reference point.

Airing the touchiest of subjects

One of the most notorious cases exposed by the MEAG is “the Butcher of Bega”.  The MEAG released the scandal to the media out of desperation to get something done.  It activated one authority, the NSW Police Force.  MEAG’s evidence led Police to establish special task forces of detectives from homicide and sex crimes squads namely Strike Force Tarella.  As for butcher Graeme Reeves, his criminality saw him imprisoned.  Besides ongoing hospital treatment death incidents, other big breaking issues were contaminated blood, breast implants, toxic knee replacements and vaginal mesh.

“There are very few truly bad doctors or nurses”, Lorraine believes, “but those few create endless misery.”  “The medical system is still covering up when it should be penalising dangerous practitioners and barring them from practising medicine. We will continue to agitate to force hospitals to be honest and governments to face facts and reduce the horrific hospital-treatment death toll.”

Iatrogenesis is alive and well in Australia, but the public doesn’t know how endemic it is. 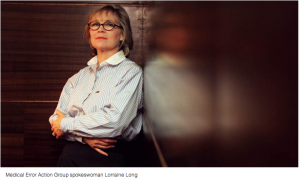 Support our work  MAKE A DONATION