Anyone on any of these drugs, see your doctor immediately to demand why!

Maker:  Multiple manufacturers (DES was never patented as it was created with British public funds).

Financial damage:  Steep, but difficult to quantify because each manufacturer paid out legal damages correlated with its respective market share (a new way of awarding damages in these cases).

DES was prescribed for more than 30 years to prevent miscarriages and other complications during pregnancy.  It was not until 1971 before it was connected to a rare tumor that kept appearing in the daughters of women who had taken it.  The FDA only banned DES prescriptions to women because no such problems have been found in men.  In fact, it can still be prescribed to men to treat estrogen deficiency.  Litigation over DES led to a landmark products liability award that heavily influenced how both courts and the FDA approach oversight of drugs with multiple manufacturers.

Financial damage:  Awards to victims close to USD$14 billion, making it one of the most costly products liability cases in history.

Fen-Phen’s was a hugely popular weight loss drug, its popularity peaking in the 1990s.  It is estimated that as many as 6.5 million people took it to help fight obesity.  After consumers began experiencing heart disease and other pulmonary problems, the FDA set the recall in motion.  American Lawyer reported that more than 50,000 Fen-Phen victims have filed suits against Fen-Phen’s maker Wyeth, and legal expenses combined with awards may have exceeded USD$21 billion.  Lengthy time in the marketplace combined with the severity of both the public reaction and the significant awards granted to its victims make its impact unprecedented.

Financial damage:  Seldane was a big moneymaker for Hoechst Marion Roussel for such a long period (the year before it was pulled, it sold USD$440 million worth of Terfenadine worldwide).  In addition to its legal expenses, the loss of market share alone to drugs such as Loratadine (Claritin) was steep.

Seldane was a popular antihistamine brought to market in 1985 to treat allergies without causing drowsiness.  The FDA sought a recall from the manufacturer after cases of cardiac arrhythmia (abnormal electrical activity in the heart) appeared in patients taking Seldane with other drugs.  The recall is notable mostly for its scale; more than 100 million patients worldwide used Terfenandine as of 1990.  Following Seldane’s recall, Hoechst was able to mitigate its damages to some degree by introducing Allegra, a drug very similar to Seldane but without its side effects.

In only one year on the market, Posicor was linked to 123 deaths.  Considered relatively safe when taken alone, Posicor became potentially deadly when combined with any of 25 different drugs.  The large number of deaths is troublesome considering that the drug was prescribed to no more than 200,000 people worldwide in the space of one year, a relatively small number.  Posicor is on this list for stimulating debate surrounding policies encouraging the FDA to hasten the approval of certain drugs.  It is often cited as a strong example of what can go wrong when drugs are rushed to market.

The Rezulin saga, originally aired by The Los Angeles Times, was an ugly view into the process by which Rezulin was eventually removed from the market, but only after the FDA seemingly delayed the process due to complaints by Rezulin’s manufacturer.  A FDA doctor who voiced concern over the drug was later removed from his position at the behest of Warner-Lambert, an action that delayed the recall process.  Rezulin, an anti-diabetic and anti-inflammatory drug, was eventually found to be causally connected with hepatitis.

Maker:  No principal manufacturer, widely manufactured across the industry

PPA, a psychoactive drug that saw many uses over its long history, is unique because the FDA never formally approved it.  For decades it was used for everything from dieting to cold medication to treatment of psychological disorders, existing in a kind of limbo where it was neither banned nor fully endorsed.  That is, until an analysis by Yale University in 2000 recognized its connection with cardiac events and stroke, particularly in women.  The study estimated that 1 woman might have a stroke due to phenylpropanolamine for every 107,000 to 3,268,000 women who use products containing phenylpropanolamine as an appetite suppressant within a three-day window.  The FDA estimates that between 200 to 500 strokes per year would have been prevented if PPA was replaced with something that presented less risks.  More than 25,000 lawsuits have been filed against a variety of drug companies, and awards for damages across the pharmaceutical industry number in the hundreds of millions, if not billions.

Baycol, prescribed to patients as a treatment for high cholesterol, is reportedly responsible for more than 100,000 deaths and about as many lawsuits.  It was connected to a severe muscle disorder known as rhabdomyolysis, which clogs the kidneys with protein from dying muscle tissue.

Vioxx is considered to be the largest drug recall in history, and one that elicited one of the greatest public outcries.  Vioxx, prescribed to more than 20 million people as a pain reliever for arthritis, was found to be responsible for increased risk of heart attack and stroke.  Both Merck and the FDA were roundly criticized for ignoring evidence of the dangers of Vioxx before its eventual recall.  The Lancet reported that as many as 140,000 people could have suffered from serious coronary heart disease from taking the drug in the US alone.  Merck settled Vioxx litigation in the US for USD$4.8 billion, with close to USD$1 billion in legal expenses.

Financial damage:  Over USD$2 billion in legal awards and expenses.

Bextra, like Vioxx, is a non-steroidal anti-inflammatory drug that was prescribed to treat arthritis and pain from other inflammatory disorders.  It was removed from the market not long after Vioxx over similar concerns – increased risk of heart attack and stroke.  In some cases, it was also found to cause a fatal skin condition.  Although less publicized and the subject of fewer law suits, Bextra still resulted in USD$1.8 billion in legal awards against Pfizer and its subsidiary Pharamcia & UpJohn (not including expenses).  The reason Bextra is on this list, however, is because it gave rise to one of the largest criminal fines ever imposed in the US.  Pharmacia & UpJohn Company were fined USD$1.195 billion, in addition to legal awards, after admitting to criminal wrongdoing, specifically with ‘intent to defraud or mislead’ in relation to the promotion of the drug.

On May 23, 2005, all of Able Laboratories’ products were removed from the market due to questions surrounding the quality of the manufacturing process.  Some drugs were found to be too potent; others not potent enough.  Moreover, four of its managers were found to have fraudulently distributed misbranded and adulterated drugs.  The recall put Able Labs out of business.

SOURCE:  Jack Campbell  with Ashley Allen and Douglas A. McIntyre

The Ten Worst Drug Recalls In The History Of The FDA – 24/7 Wall St. 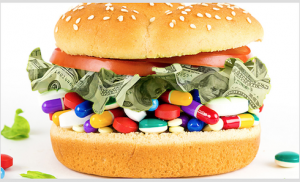 Pills for your ills