In June 1994, June Long was admitted to hospital following an asthma attack. 14 hours later, on 29 June, she was dead;  not from asthma, but from clinical incompetence.

Three doctors, Ashley MILLER, Andrew TYMMS, and Matthew CONRON, in one of Australia’s largest public hospitals, THE ALFRED, in Prahran, an inner south eastern suburb of Melbourne, Victoria, misdiagnosed her condition and, together with hospital administrators, lied to hide their malpractice.  When the “alarm bells were ringing” specialists were not called in until the crisis had occurred.

To cover up the negligence, doctors arranged for Mrs Long, in a comatose state, to be transferred to Fairfield Hospital in Yarra Bend Park Road, 10km away, so she would be declared dead either in the ambulance or upon arrival at Fairfield Hospital.  The Alfred’s ICU registrar Dr Ann WHITFIELD and ICU head Dr Carlos SCHEINKESTEL vetoed Mrs Long being moved to ICU because the clinical incompetence needed to be covered up and Mrs Long needed to be declared dead anywhere but The Alfred to “save them”.

June Long died alone.  At no time was the family alerted to her deteriorating condition and subsequent death until 1 hour 40 minutes after she died.  But before June Long’s family even knew she was dead, the ruthless ALFRED HOSPITAL had contacted its lawyers and insurers first.

Dr Matthew CONRON, Professor Haydn WALTERS and Dr Jennifer BARTLETT knowingly and intentionally conspired to sign off an untruthful ’cause of death’ entry on the Death Certificate.  Once the lies started, they had to continue.  Wilfully lying on the Death Certificate meant the ALFRED HOSPITAL breached its statutory duty by failing to report the death to the Coroner.  The ALFRED HOSPITAL classed her death as “routine”.  They thought everything then was rosy and no one was the wiser.

If lying to the family wasn’t bad enough – doctors didn’t get their stories straight – the ALFRED HOSPITAL could not locate June Long’s body when the family and the undertaker arrived.  Hospital clinicians told the family they had conducted an autopsy and her body was at the morgue.  It was a means to get rid of the Long family and its awkward questions.  From that day THE ALFRED engaged in deceit, hostile obstruction and ruthless conduct beyond belief orchestrated by despicable medical administrators Dr Larry Wall OSBORNE and Dr Michael “Taffy” Robert JONES.  They wrote a chain of false and misleading letters to the State Coroner of Victoria in an attempt to deter the Coroner investigating.

The Long Family wises up

But what THE ALFRED didn’t bank on… were the bloodhounds in the Long Family getting to the bottom of it.

A call to the Coroner… and the media

On the day of the funeral the so-called autopsy was discovered to be untrue.  No autopsy had been conducted.  The family alerted the Coroner.  The family also alerted the media.  With front-page coverage in the Melbourne newspapers, acting VIC Minister for Health Robert KNOWLES announced that there would be a government inquiry.  Then the day after burial Victoria Department of Justice requested permission for exhumation.  If the media had not exposed it, June Long’s death would have been another hospital “routine” death covered-up.

Then it was over to the Coroner to do his job.

Against a backdrop of political interference following Mrs Long’s death publicity, the Victorian State Government ordered a “peer review”.  Weeks later VIC Minister for Health Marie TEHAN, pre-empting the Coroner’s investigation, declared on ABC Radio and to The Moorabbin Standard that ‘an internal review by the Alfred Hospital into the treatment Mrs Long received before she died had not uncovered any errors’.  Health Minister TEHAN adding she was ‘comfortable that the clinical decisions that were made were the right ones in the circumstances’.  Decisions were the right ones?  June Long ended up dead!  Circumstances?  She was in a hospital!  The Minister also stated she was ‘at ease with the government inquiry’.  At ease?  Over an unexplained death of a patient!  Government inquiry?  There wasn’t one!  Only an exercise by public servants spending a lot of public money covering-up unacceptable levels of public safety.

Shenanigans at The Alfred Hospital

The despicable antics of the Alfred Hospital’s deputy directors of Medical Services, Dr Larry OSBORNE and Dr Michael “Taffy” JONES, included falsely informing that the media the Long family didn’t want the Coroner investigating.  They also wrote to the Coroner falsely claiming that ‘The Alfred had implemented system changes that would see it never happened again and, as a result, a Coroner’s Inquest was unnecessary’.  The lies were breathtaking.  It took the hospital 9 years to make some half-hearted system changes the Coroner recommended.  About the same length of time it took the Long family to get the false Death Certificate corrected.

Medical records were tampered with, some never to be found.  Medical records were withheld from the State Coroner of Victoria and the Long family.  ICD coding was lacking and knowingly false.  Six clinicians refused to provide depositions to the Coroner.  Some of these had spoken to the media about the death but did not have the fortitude to elaborate in front of the Coroner to assist him in his investigation.  Hospital obstruction ruled.

The most enlightening development during the wait for inquest was the series of anonymous letters the Long Family received, post-marked country Victoria, with information on Mrs Long’s hospital admission.

Outside the courtroom on Inquest Day 1, the shenanigans continued in the men’s lavatory with The Alfred’s lawyers threatening a young doctor that if he ‘spilled the beans’ his medical career would be over.  Members of the Long family overheard it from the adjoining women’s lavatory.  Thankfully for the Long family, this young doctor did ‘spill the beans’ and he was the only one who did.

Hospital refuses to hand over files for Inquest

During the March 1996 Inquest the Coroner expressed concern at the lack of medical information provided for an Inquest.  The ALFRED HOSPITAL was exceedingly obstructive.  Statements provided by clinicians were inadequate having been orchestrated and controlled by Alfred Hospital lawyers in an attempt to control the evidence.  The hospital refused to hand over its file and withheld its audit of the death saying such reviews were protected under the Health Services “quality assurance” legislation.  Curiously, that didn’t apply to VIC Minister for Health TEHAN who spoke about it to the media just weeks after Mrs Long’s death.

In August 1996, after a two-year coronial investigation, the State Coroner of Victoria, Graeme Johnstone, found Melbourne’s Alfred Hospital contributed to the death of June Long.  The Long Family’s dogged pursuit for the truth was justified.

The Coroner found that ‘by not ensuring a protocol was in place to provide advice and/or review by a Respiratory Unit Registrar/Specialist on admission to that unit’.  She was treated by an intern with five month’s experience, and a registrar – not a respiratory specialist.  The intern was left ‘without adequate supervision for a potentially complex case. The chance of a successful outcome in Mrs Long’s case would have been greater had she been managed by a clinician with respiratory experience’. The intern’s lack of experience was ‘understandable’ and it was ‘the system that needed addressing’. The Coroner found ‘although there was no intensive care unit bed available at the hospital when Mrs Long became critically ill, the real issue was her earlier treatment in the Alfred Hospital’s respiratory unit’.

‘The lessons from this death are twofold:

1.  Oxygen-induced hyperventilation is a danger in the conservative management of respiratory failure.  It needs to be considered, sought and actively treated.

2.  There is a tendency to place too much comfort in satisfactory oximetry measurements.’

The Coroner found several clinicians involved in treating Mrs Long ‘did not make a complete record of the events’. Thus, the Coroner suggested, ‘the problems associated with a failure to take accurate notes be emphasised through the relevant medical colleges’.

‘The Department of Human Services should issue a warning to all hospitals and medical colleges to take special note of the case’, State Coroner Johnstone stated.

But the malpractice did not stop

In November 1998 the Long Family requested the Victorian Government Reporting Service (VGRS) transcribe 40 missing minutes from Inquest Day Three.  When the Long Family waited for transcript production, the VGRS, stupidly or deliberately, incinerated the entire Inquest recordings for reasons unexplained to this day.

Then the final insult:

The Alfred Hospital offered to make a “compassionate” contribution to the Long Family to ‘go halves in the coffin’. 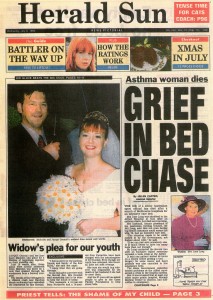 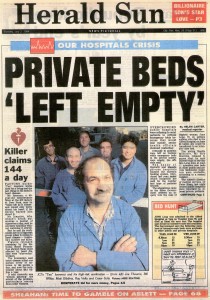 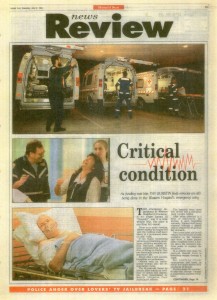 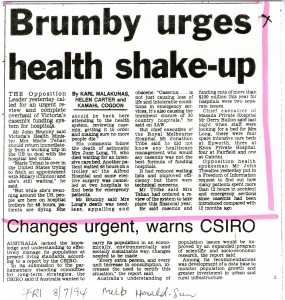 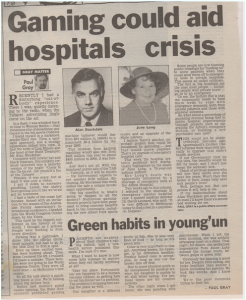 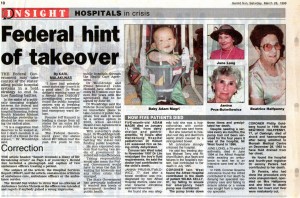 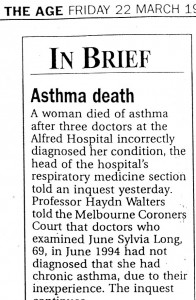 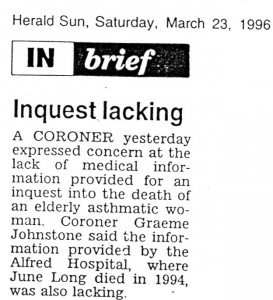 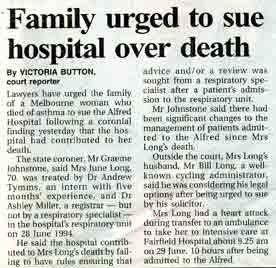 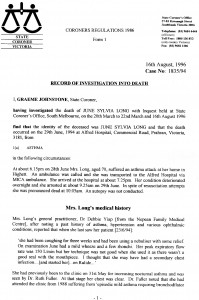 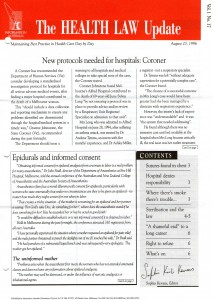 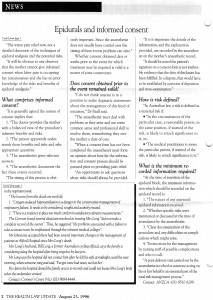