Thousands of patients die each year from the deadly infections lurking in our filthy hospital wards. It’s an epidemic raging out of control, as antibiotics are rendered impotent.  “Superbugs” are soaring and they are gathering strength all the time.

Every affluent country in the world where antibiotics are in widespread use is facing the superbug problem, but there is no doubt that it is reaching crisis level in Australia as it already is in Britain and the USA. British hospitals are the most dangerous in Europe for the potentially fatal bug, which prevents wounds from healing. Recent outbreaks in Australian hospitals were out of control necessitating closing wards and operating theatres and cancelling surgery. The main problem was VRE, which is present in many healthy people but can cause serious illness in very sick patients. It can be transmitted on the hands of staff, patients and visitors.

The hospital-acquired infection situation in Australia is no better than England and may even be worse. In 1997 a medical journal reported that patients ‘have more than a 1-in-10 chance of picking up infections in hospital’. A recent report on a related bacterium, MRSA, suggested that some hospitals in Australia lack infection control units (such as isolation units), which are common in the USA. One study on MRSA prevalence in Ireland, and Northern Ireland, found that 700 hospital patients were infected by MRSA during one fortnight in 1999.

A European study suggests that, among European countries, Ireland has one of the poorest records for MRSA infection, with only Italy, Portugal and Greece faring worse. In fact a report of European Anti-Microbial Resistance Surveillance System for 1999 showed prevalence in Ireland which was more than 4 times that of Germany. Proper hand washing, good antibiotic practice, effective ward cleaning and patient isolation are of crucial importance in reducing the spread of MRSA in hospitals. This is of concern for many Irish nurses come to Australia on working holidays and work in our hospitals.

Roll on another 10 years…  HAS ANYTHING CHANGED?  NO!  Superbugs are as deadly as ever. 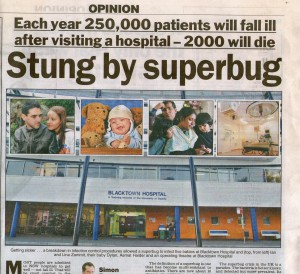 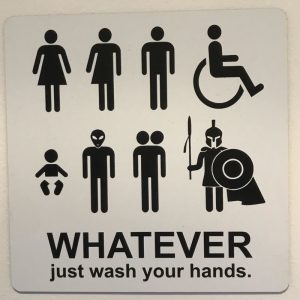 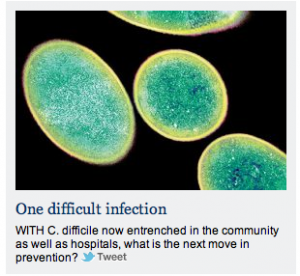 Off to hospital?  To keep an eye on things→   GET A WATCHDOG!

SUPERBUGS HAVE BEEN AIDED BY TWO FACTORS:

All hospitals must have a mania for cleanliness like Scottish surgeon, Joseph Lister, who virtually “invented” hygiene in the 19th century. Patient safety is and must be paramount.

MRSA is a type of germ, which is resistant to a wide range of antibiotics. Like other strains of Staphylococcus, MRSA can live on the skin without causing infection in most people. Hospital patients are especially vulnerable to MRSA and are too weak to fight it off. Staphylococcus aureus can cause actual infection and disease, particularly if there is an opportunity for the bacteria to enter the body, through a cut or an abrasion, for example. But newly emerging strains are causing life-threatening infections in otherwise healthy people. The antibiotic resistance problem arises because bacteria are constantly mutating, creating tiny changes in their genes. In order to stop it spreading you must remember that germs are normally passed by hand. It will normally be spread to patients from someone else in the hospital who has it. Effectively the MRSA bug “hitchhikes” a ride on someone’s hand until it gets to your body. Once it has arrived it prefers to live in wounds.  In the pre-antibiotic era, mortality was as high as 90%.

What about MSSA?  How serious is it as opposed to MRSA?

MSSA infection, which is also known as Methicillin Sensitive Staphylococcus Aureus, is a disease that we see popping up more and more these days.  It’s particularly dangerous and scary for a number of reasons.  The first reason is because it is most commonly contracted while at hospitals, when a person is often in a weakened condition.  The second reason it’s scary is because it’s resistant and sensitive to powerful antibiotics, making it especially tricky and difficult to eradicate.  MSSA and MRSA infection are virtually the same extremely dangerous disease, with minor differences, because they both are antibiotic resistant and generally are contracted hiding out at hospitals.  The most famous case of a patient contracting one of these diseases in hospital is British actress Leslie Ash, who found herself paralyzed once an MSSA infection attacked her spinal tissue, which was introduced through an epidural injection.

Staph infection can invade the body through a number of channels.  Most commonly, it inhabits the soft tissues of the nasal cavity, the respiratory tract, as well as open wounds.  Depending on the area infected, staph will often manifest itself as red bumps, which ultimately grow into painful boils.  Fever and rashes often accompany the boils.  When MSSA is introduced into either a wound, or else into healthy tissue somewhere inside the body from either shots or surgery, the symptoms and effects of the disease may be enhanced.  Paralysis of the lower half of the body is very common, along with lasting pain in the area where the infection occurs.  After MSSA infects the body in a specific region of tissue, it begins to grow and becomes very difficult to eradicate.  Often large portions of tissue must be cut away and heavy doses of antibiotics.

What is C. difficile?

Clostridium difficile is a spore-forming bacterium, which is present as one of the “normal” bacteria in the gut of up to 3% of healthy adults. C.difficile is much more common in babies – up to two thirds of infants may have it in the gut, where it rarely causes problems. People over 65 are more susceptible to infection. It can cause illness when certain antibiotics disturb the balance of normal bacteria. Its effects can range from nothing in some cases to diarrhoea or severe, life-threatening, inflammation of the bowel.

Glycopeptide-resistant Enterococci, are commonly found in the bowels of most people. There are many different species, but only a few can cause infections in humans – 95% of infections are caused by Enterococcus faecium and Enterococcus faecalis. These species are the two most common strains of GRE, which are resistant to glycopeptide antibiotics (vancomycin and teicoplanin). GRE commonly cause wound infections, blood poisoning and infections of the abdomen and pelvis.

If you know that you have had Staphylococcus then you should tell your doctor and also inform the hospital if you are re-admitted. Hospitals may very well discriminate against you by refusing to admit you but you have a duty to your fellow patients to disclose it. You also have the right to demand of a hospital to be isolated away from the main ward area and if the hospital will not accommodate you indicates they have no infection-control protocols in place.

SOME OF THE SUPERBUGS

THE LATEST SUPERBUG TO JOIN THE “SUPERBUG CLUB”?

ANTIBIOTIC RESISTANT DISEASES AROUND THE WORLD

CLEAN UP YOUR ACT is the main advice we give hospitals!

THE GOOD SIDE OF BACTERIA

A recent feature in “Scientific American” magazine reported on the latest findings on microbiomes.  This is the name given to the trillions of bacterial cells that inhabit our mouths, intestines, genitals and skin.

The number of bacteria we host outnumbers human cells by a factor of 10-to-1.  They vary from being pathogenic (disease causing) or benign to actively benevolent for our bodies.

There are some particularly helpful bugs.  Bacteriodes thetalotaomicron creates over 260 enzymes that digest plant material, allowing us to extract nutrients from potatoes and other vegetables.  Other bacteria assist our immune system, reducing the risk of disease. 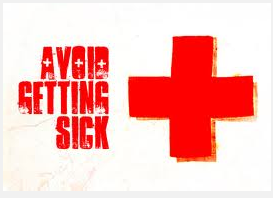