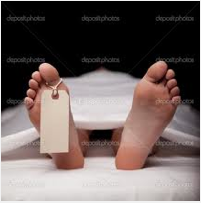 To our great distress, it is currently IMPOSSIBLE to accurately count the deaths caused by medical error.

Australia’s Minister for Health the Hon Carmen Lawrence announced this abominable figure of 18,000 deaths in one year, was announced in Parliament on 14 June 1995.  Then it was peer reviewed and published in The Medical Journal of Australia in November 1995. The figure is actually extrapolated from a statistically valid sample of 14,179 hospital admissions.

We believe it underestimates the horrifying magnitude of medical error. Over two decades later, we are still waiting for a standardised, accurate, centralised, compulsory system for recording the death toll. When this exists, it will expose hospital managements to public scrutiny.  Even more important, it will give the medical system the opportunity to learn from its mistakes – and prevent them.

If you think we are being alarmist, consider this: Medical error is totally ignored as a cause of death by the Australian Bureau of Statistics (ABS).  It should be at least second from the top. 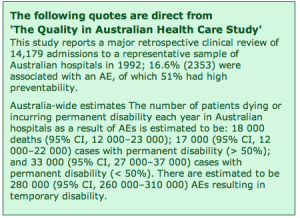 For a comprehensive overview read:

A more recent Victorian study gives more cause for alarm

At this rate, the national tally of medical adverse events would be over 54,000 leading to 13,500 preventable deaths.

18,000 dead? 13,500 dead? Nobody knows for sure. But every study shows that the suffering and death caused by hospitals far exceed the road toll * – a national, shameful scandal.

See MJA: The incidence and cost of adverse events in Victorian hospitals 2003–04

“Case-mix” turned out to be case-shambles

Around two-thirds of senior clinicians were of the view that government reforms have contributed to a deterioration in the quality of clinical care in their respective hospitals.

The main reasons for the decline were increased economic pressures caused by the drive for shorter lengths of stay in hospitals and increased patient throughput, a higher proportion of beds occupied by seriously ill patients and staff reductions.

Increased patient acuity, reduced patient/staff ratios, a reduction of experienced staff and not enough time for more supervision have contributed to the increased proportion of adverse events.

…Acute Health Services Under Casemix – A Case of Mixed Priorities. Tabled in Parliament of Victoria, May 1998. 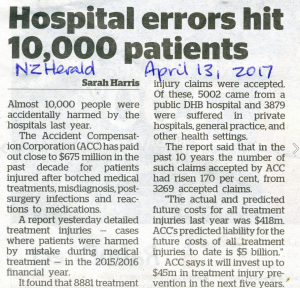